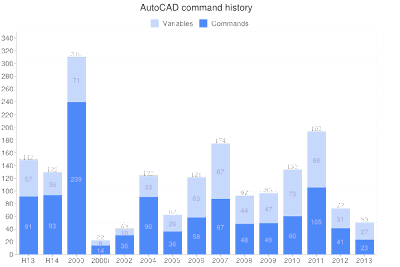 When I look at the new features of the recently released AutoCAD 2012, I can see less new functionality than usual - compared to previous releases. There are interesting new functions for 3D - e.g. the import of the CAD formats of non-Autodesk CAD software, the 3D model views, the new 3D editing functions - but for 2D drafting there are not so many enhancements.

One notable 2D feature is the dynamic array - you can interactively make and modify radial and rectangular and path arrays. Another general new feature is the Content Explorer - finally you can quickly search contents (texts, blocks...) of DWG files, not only on your disk but also on other PCs in your network. But all other enhancements are really small ones.

I cannot forget the online functions of AutoCAD WS but for people working on local DWG files it brings no direct productivity enhancements. What I don't understand fully is the decision to bundle Inventor Fusion. Why is it a part of AutoCAD now? Doesn't AutoCAD have enough 3D editing functions of its own?

PS: I have now received a Twitter notification for a command history graph - it confirms the size of the AutoCAD 2011.5 (aka 2012) version having the least new commands since version 2002

My job is no longer directly related to AutoCAD so I will contribute to this blog less frequently. But I am still an AutoCAD fan so whenever I find something noteworthy about AutoCAD, I will try to post a blog message.

Borrow Autodesk hardware for your renderings

If you happen to render a series of large scenes, don't bother with snapping a new superfast hardware - Autodesk gives you its own hardware to perform this task.

Just login to the Autodesk Neon web service and upload your DWG file containing the 3D model (any size, any complexity), materials, lights and cameras. Then choose the camera (view), the output resolution, quality and the resulting file format. Now you have to wait a couple of minutes for your render to complete - rendering computation is performed on an Autodesk web cloud. Neon will send you a notification e-mail when your job or series of jobs is finished and ready for download.

This is perfect for last minute renderings when any computer in your office is too slow to complete the job before deadline...

DraftSight and other DWG incompatible clones

There is the Dassault's DraftSight, CAD Schroer's STHENO/LX, Graebert's ARES, ProgeCAD is said to be in the works, and maybe others.

The first strange thing in these feverish activities is the Mac platform. I don't know if the US market is so different but there are simply no Mac users in the technical/engineering industry in Europe. Someone should divulge that to these vendors.

The second thing is the lack of innovation. Are all these software vendors so short-sighted and non-creative that they are able only to copy (steal if you wish) an existing software - AutoCAD - and bring no own idea into their development?

And the third thing - the most important for us, users. When they happen to copy AutoCAD, they should do it right. I had a chance to try DraftSight which is said to read/write DWG files "almost like AutoCAD" and I can say that this is simply not true. DraftSight reads most of the DWG contents but not all! Some drawing objects are missing, some objects are interpreted differently that in the genuine AutoCAD. So you definitely cannot trust the DWG drawings you open or even modify in DraftSight. It does not support DWG, it does support only a clone of the DWG format (a subtle but important difference).

So if there happens to be some Mac users longing to process DWG files on their apple-boxes, they will need to use the official "AutoCAD for Mac" by Autodesk.

The usual command used for NOP function is ID. But there are more, maybe better examples of these idle commands - e.g.:

AutoCAD WS - a good thing in the Mac story

I can see a single positive thing on the whole AutoCAD for Mac story, which still makes little sense for me - AutoCAD WS. My reservations about putting effort in developing "another AutoCAD" instead of polishing the right one can be found in my previous posts.

But there is one offspring of the Autodesk-Apple story that is very interesting and very promising for Autodesk's future. AutoCAD WS (I understand that this will be the resulting name of the whole Butterfly Project) is a web cloud application running on Autodesk servers in the internet. Through the lightweight client of AutoCAD WS you can work on DWG drawings on virtually any device - a Flash-enabled internet browser on a PC, on a Smartphone, on an iPad or even on an iPhone and iPod. AutoCAD WS now supports only a limited subset of DWG objects (2D only) but still - this sounds promising.